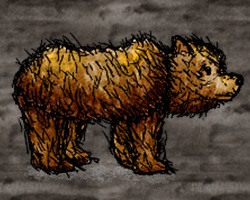 Grizzly Bears are animals which can be found in their bear caves in the Badlands. They can travel far from their den and will follow their prey. They need to be shot with a Bow and Arrow 3 times to be killed. 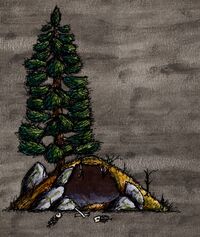 Bear Caves spawn in the badlands and are the home of Grizzly Bears. Poking a cave two times will 'awaken' the resident bear, which will emerge from it's cave and chase any nearby players. An empty cave will regenerate a bear after 24 hours. If a bear is physically blocked from exiting the cave, it will reenter the cave.

A bear requires 3 arrows before it dies. Running into a bear will result in a bite wound, which if not treated promptly (with Sterile Wool Pad and Needle and Thread), will result in death.

When a bear comes out of its cave, it will be in a "Hungry" state. A bear in this state will chase the player. You can change its state to "Fed" by leaving raw mutton on the ground, and the bear will eat it. In the fed state, a bear will move randomly, but is still deadly, and will return to the chase state if shot, or if it attacks a player.

Due to the way animals move, you cannot be harmed by hostile animals if you are standing on a tile that has an item occupying it. They will still chase you, but they will be unable to harm you unless you are standing on bare ground. Riding a Horse will also make you immune.

Once you kill a bear, the 3 arrows can be removed, and the bear can be skinning using a Flint Chip or knife. After the Bear Skin is taken, the corpse (which cannot be moved) will decay after 1 hour. An unskinned bear corpse will decay after 2 hours. A bear corpse still containing arrows will not decay.