One Hour One Life Wiki
Register
Don't have an account?
Sign In
Advertisement
in: Bones, Farming, Animals 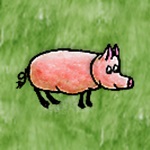 Domestic Pig is an animal domesticated from a Wild Boar, which can be farmed for Raw Pork. It can be killed and butchered with a knife to give 4 pork and pig bones.

A pig will tend to follow a player. By standing where you want the pig to go, it will most of the time move that way. Having more players may complicate things. Pens are a popular strategy to keep pigs contained.

Pig farming starts with a good pig pen. There are several reasons why pigs should be contained; Dangerous Domestic Boars can be contained; Pigs will leave dead piglets everywhere, and block the space they stand on making it difficult to put things down; Plus you will be able to find them more easily. Several pen designs are possible, using fences, oven bases, boxes and even Rose Bushes. The size is not overly important, if you just leave enough space to allow a piglet to move off the mother. You can leave room to expand if you wish.

To start with you will need at least one Bowl with Corn Kernels, and one more later on. So an established corn farm is necessary. Create a Bowl with Corn Kernels by adding a Dried Ear of Corn to a Clay Bowl and using a Flint Chip or knife. It is helpful to have this ready before you get the piglet, or you or the piglet could starve while waiting.

You will also need a bow and arrow. Scout around until you find some Wild Boars in the swamps, preferably close to camp. When everything else is ready, take the bow and arrow to the boars (using a backpack makes this part easier, or you can team up). Wait until the boar is in its family form, and shoot it with the bow and arrow. Note: Be careful not to run into the boar as it will inflict a Hog cut wound.

Make sure your hunger bar has enough to get home (if you didn't bring food, you can run back to get some now, as the piglet will remain indefinitely on the dead boar). Pick up the piglet and take it back to camp, being careful to avoid hazards along the way. Drop the piglet in its pen, and promptly feed it with the prepared corn. Now you can relax a little. The fed wild piglet will grow up into a Domestic Boar, which produces domestic piglets. Note: Domestic Boars can inflict wounds the same as wild boars. Simply feed the domestic piglet with another bowl of corn kernels, and it will grow up into a Domestic Pig.

Using the knife on a Domestic Pig will result in Dead Domestic Pig, then used again will give Butchered Pig. It contains four raw pork which can be taken from the corpse for use in tacos, or domesticating dogs. This leaves pig bones, which will disappear after 2 hours, or can be moved with a basket.

Over time, the pig pen will fill up with dead piglets and pig bones. Cleaning is necessary to allow space for new piglets. Dead piglets can mostly be ignored as they will decay in only 5 minutes. However, pig bones take 2 hours to decay, so are best moved out of the pen by using a basket. For multiple bones, the most efficient way is to use a Hand Cart which can hold 4 baskets of pig bones.

Dead Piglets can also be thrown in a trash pit.