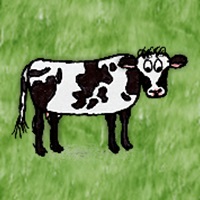 Domestic Cows are animals which can be farmed for milk and butter. They are the domestic equivalent of bison. Feeding a cow a mango leaf will give Urushiol Poisoned Cow from which 3 Bowl of Mango-Infused Cow Urine can be harvested, leaving Dehydrated Urushiol Poisoned Cow. A poisoned or dehydrated cow will turn into Dead Cow after 15 seconds.

Domestic Cows can not be leashed the way calves can, however a cow will tend to follow a player. By standing where you want the cow to go, it will most of the time move that way. Having more players may complicate things. Pens are a popular strategy to keep cows contained, although less common than sheep pens as cows do not cause as many problems as sheep.

Although not as important as a sheep pen, you may wish to designate a contained area for your cows so you will be able to find them easily. Several pen designs are possible, using fences, oven bases, boxes and even Rose Bushes. A cow pen can be relatively small, with just enough space to allow a calf to move off the mother.

To start off with you will need at least one Bowl with Corn Kernels, and to get milk you will need at least 3 bowls of feed. So an established corn farm is necessary. Create a Bowl with Corn Kernels by adding a Dried Ear of Corn to a Clay Bowl and using a Flint Chip or knife. It is helpful to have this ready before you get the calf, or you or the calf could starve while waiting.

You will also need a rope and a bow and arrow with two arrows. Scout around until you find some bison in the prairies, preferably close to camp. When everything else is ready, take the rope, and bow and two arrows to the bison (using a backpack makes this part easier, or you can team up). Wait until the bison is in its family form, and shoot it with the bow and arrow. Bison require two arrows to kill (hence the second arrow). Don't worry, once you land the first arrow, the bison will remain in its family form.

Make sure your hunger bar has enough to get home (if you didn't bring food, you can run back to get some now, as the calf will remain indefinitely on the dead bison). Use the rope on the Dead Bison with Calf and lead the calf back to camp, being careful to avoid hazards along the way. "Drop" the lead in the cow pen, and promptly feed the calf with the prepared corn. Now you can relax a little. The fed bison calf will grow up into a Domestic Bison, which produces domestic calves. Simply feed the domestic calf with another bowl of corn kernels, and it will grow up into a Domestic Cow.

In order to milk a cow, you need to trigger it into producing a calf. To do this, feed it a Bowl with Corn Kernels and it will turn into Domestic Cow with Calf. After 30 seconds, the calf will separate from the mother, and the cow will become a Milk Cow. After 30 more seconds it will revert to a Domestic Cow, so you need to milk it quickly using an Empty Bucket, which will give you a Full Bucket of Milk and turn the cow into Dry Milk Cow. From the dry state, the cow can be returned to a milking state by giving a Bowl of Water. However, after 30 seconds (including the time in its milk state), it will revert back to a Domestic Cow. So to take advantage of this you would need a water source and a lot of buckets at the ready.

Using a Clay Bowl on a full bucket of milk will give Bowl of Whole Milk which can be drunk as food.

Combining a bucket of whole or skim milk with a Bowl of Slaked Lime will create Bucket of Milk Paint which is the basis of various paints.

Feeding a cow a mango leaf will give Urushiol Poisoned Cow from which 3 Bowl of Mango-Infused Cow Urine can be taken. Harvesting the 3 bowls will make Dehydrated Urushiol Poisoned Cow. A poisoned or dehydrated cow will turn into Dead Cow after 15 seconds. The cow urine can then be further processed to get yellow pigment to make yellow paint.