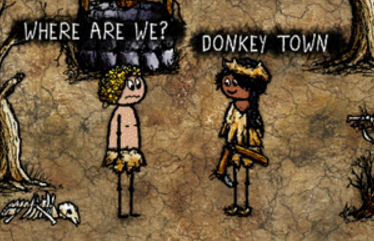 Cursing is a player-influenced anti-griefing system.

If you see another player griefing, you can 'curse' them by using phrases such as "CURSE X" where X is the desired name. When a player curses another player they are unable to be born X amount of tiles around the player that curses them for 90 (real) days. The block radius is this: 50 * [number of living people who have you blocked] + [number of total people who have you blocked] ^ 2

Contrary to initial belief, Donkey Town is not an actual town. It is simply a very far away spawn with a lower population. It is not recommended to try and purposely get yourself sent there to see what its like.

Many players mistake harmless acts for griefing, due to misinformation or an incomplete understanding. Even murder is not always necessarily griefing. Misunderstanding can be alleviated by asking simple questions of the perpetrator (e.g. "WHY?"). Use your judgement and remember- one day the misplaced blame may be cast upon you!

For these reasons please use curses wisely.

These are the accepted phrases used in cursing.

A successful curse is accompanied with purple speech text, and a chime noise. A player's full name must be used, for example: "Curse Sally West" or "I curse Sally West". Using just the first name will either be unsuccessful or curse the wrong player. Unnamed players cannot be cursed. However, it is possible to name an unnamed player, by either the usual method of holding and saying "You are NAME", or (if they are too old to hold) standing nearby (within about a screen's distance) and saying "You are NAME".

Babies and children are unable to curse other players whose names exceed their character limit. However, it is possible to curse a player for up to 5 minutes after their death, allowing you to curse them or convince others to curse them once you have grown older.

It is not possible to curse yourself, even in another life.

You can only curse players within 200 tiles of you, even after death.

Curse names are permanent names associated with your account. When you curse someone you will see their curse name appear over their heads every few seconds surrounded by 2 X's. Example: X CURSE NAME X. Curse names ares completely random words chosen from a list and it is impossible to change it. Though very rare, it is possible for two people to share the same curse name.

Curse names are the same for every player, so if two people curse you they will both see the same name. This is a good way to keep track of the people you have cursed and many players keep a log of the curse names of people and what they have done. If they see them again in game they know exactly why they were cursed.

It is possible to forgive someone you have cursed by saying I FORGIVE YOU while standing near them. It will forgive the nearest cursed player. You can also forgive players by saying "I FORGIVE FIRSTNAME LASTNAME" to be more precise. You can tell it has worked because their text box will return to white and their curse name will stop flashing above their heads every few seconds. This will completely remove the curse from them.

When the game is unable to find a mother outside of your curse radius you will be sent to Donkey Town. You do not have to live a full life in Donkey town as you can die and try to be reborn again and hopefully a mother will be outside of your radius. Donkey town is located 30,000 tiles away from the main player area on Bigserver2. You can tell you are in Donkey Town by your curse name being displayed above your head every few seconds. (EX: X DONKEY TOWN X). Curse names are randomly generated text assigned to every player. Your text box will also be black. Donkey Town residents are always born an Eves. Your curse score, represents the number of times other players have cursed you. You cannot see your curse score nor anyone else's. Curses decay after 90 (real) days or if the player who has cursed you forgives you by saying "I FORGIVE YOU" or "I FORGIVE FIRSTNAME LASTNAME".