One Hour One Life Wiki
Register
Don't have an account?
Sign In
Advertisement
in: Animals, Bones, Farming 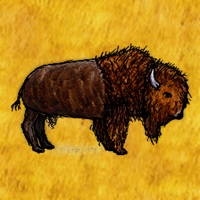 Bison are animals found in the Prairie which can be domesticated into Cows. Bison are docile and can be killed using a bow and arrow. Two arrows are required to kill a single bison. A Dead Bison will despawn after 2 hours. Dead Bison Calf despawns after 5 minutes. It is currently not possible to butcher bison.

If a bison with calf is hunted, the calf can be lead with a rope. It can be released and leashed again with the rope. A released calf will eventually become hungry, and can be fed with Bowl with Corn Kernels to grow up into a domestic bison, if not fed, it will die. Soon after it grows, the domestic bison will generate a domesticated calf, which when fed will turn into a Domestic Cow.